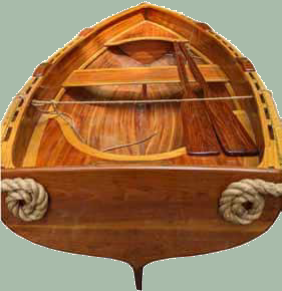 The Historical Society is excited to announce that we now have a Bill Freese wooden boat on display at the Marine Museum. The dinghy is made of Beaver Island cherry and has his signature under the seat. But, who was Bill Freese?

Bill Freese came to Beaver Island with a dream. He wanted to open a boat building shop making hand-made canoes and dinghies. Bill was a Korean vet who earned a Purple Heart and he wanted to share his skill with other veterans. In 1985, he opened the St. James Boat Shop in the building that is now Whiskey Point Brewing. For almost 30 years he built wooden boats of various kinds, all the while sharing his skill with anyone interested. Bill didn’t advertise, but his business grew by word of mouth because he was such a skilled craftsman. He became a cultural touchstone on Beaver Island. People came to the Island to see and buy his boats and his shop was also a local gathering place. Bill said, “Winter is for working. Summers are for talking.” It took 300 hours to make a canoe or dinghy using Beaver Island cherry and cedar with a protective graphite bottom coating. Since there was waiting time involved between steps, Bill needed something else to make during downtime. So, he started making buckets. Watertight wooden buckets. Hundreds and hundreds of them. He created them with thin splines of cherry wood, stain and four coats of varnish.

In 2005, Dan Burton became an apprentice with Bill and worked part time with him and, in 2009, Dan and his wife, Carol, became Bill’s business partners. During this time, Bill bought a bigger building near his shop dreaming of expansion. Bill died in 2012 still building boats. Dan and Carol continued the business eventually achieving Bill’s expansion dream when they opened St. James Boat Shop at its current location around the corner from Whiskey Point Brewery. The Society is proud to house one of Bill’s beautiful boats and we thank Jan Gerson for her donation.